Badlands- the name sparks curiosity. I’ve always been fascinated by the Badlands in South Dakota.  The area is in many ways like a desert but its home to the United States largest protected area of mixed grass prairie. It seems devoid of life. Yet it is home to 329 animal species and over 400 plant species. The extreme temperatures, the empty feeling, and how limited water is made it a “bad lands to travel through.” I love French- American trappers, that phrase came from “les mauvais terres pour traverse,” when it comes to naming things though the Lakota had it right: “mako sica,” or “land, bad,” hence the “Badlands.”

In honor of throwback Thursday, here is a story of adventure, trial and error, and companionship.

I decided to go camping in the Badlands to kick off the end of my work season (sort of) in mid-August. Originally, it was only going to be my boyfriend (now husband- I’m working on the honeymoon blog) and myself. However, we invited some additional friends. I should have told them up front I was boring- I wanted to hike, spend time in the visitor center, drool over the paleontology lab, and listen to park rangers give programs. They were expecting more camping activities, campfires, and fun times. I really can’t blame for finding my trip planning lacking. I’m still boring, I’m just not in charge of the trips anymore…

The camping wasn’t too bad but it could have been a little more fun. Especially since you can’t have campfires in Badlands NP. I should have brought some more camping games than just a frisbee and cards. Hindsight is 20/20. We still had a lot of fun the first night- cooking, playing frisbee, and sitting around shooting the breeze. I and one of my friends went to the evening program about astronomy I think…it’s been three years…

After the program and wandering back to the campsite admiring the beautiful night sky- one thing I truly like about rural Nebraska and South Dakota, the night sky is unbelievable. We sat around the lantern playing cards and talking before we climbed into our tents. Tomorrow was going to be a big day!

Little did we know what we would be getting ourselves into…

The morning was glorious, the sun rising over the buttes and pinnacles casting marvelous shadows over the mixed grass prairie. We reconvened at the grill and picnic table to figure out where we were going to hike.  Busting out the maps, guides, and other materials that I dragged along with me. We got down to business.

Since, Wade, Kris, and the others had been to various points of interest before and it was still fairly crowded at most of the shorter, more popular trails. The group decided to do the Castle Trail. In hindsight, I wished we had done the Medicine Root Loop- it was only 4 miles round trip. The Castle Trail on the other hand was 10 miles…

We thought we had planned well for it taking extra water, snacks, and other essentials. I made the dreaded mistake every hiker makes at least once- I assumed there would be water at the Fossil Exhibit Trailhead- since it was a popular place and lots of people were coming and going. This assumption would be what made me kick myself; it’s also the reason I go on long tirades about having enough water and carrying more than you need.

The hike started out pleasantly enough. We left the parking area in high spirits, signing the log book, and talking joyfully. Kris made a comparison to Lord of Rings, which got a laugh from me. It was going to be a good day. 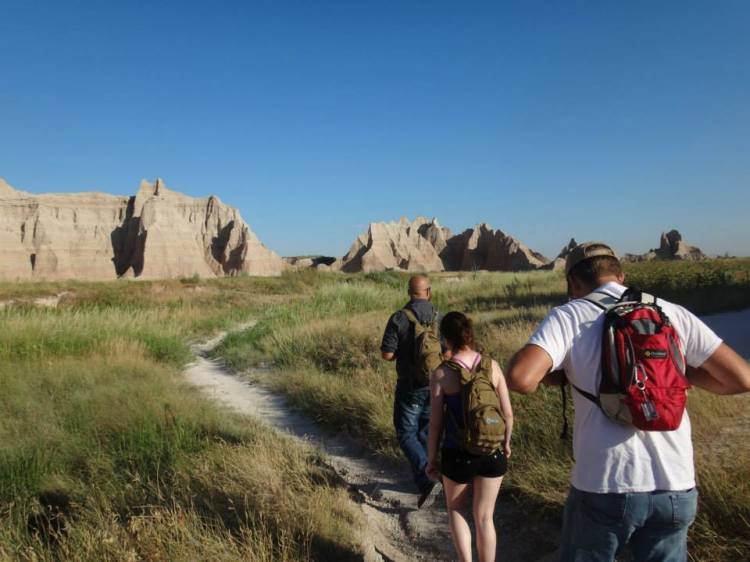 We made it to the first grouping of pinnacles and buttes. They were so cool up close and me being drawn to heights led me to climb up to the top of one- I’m pretty sure this waste of water and energy would come back to haunt me later but it was worth it for the view.

Once I returned to the bottom, Wade was relieved- he just knew I was going to fall and break something (he does have a point, my track record with stairs hasn’t been great but I’m good on mountains, buttes, and ledges). The trail meandered around to the back side of the butte we climbed around and broke into mixed grass prairie, highlighted by blue sky.

The trail kind of followed the butte and as we came around the edge we saw Bighorn Sheep- I was in nerd heaven. Mixed grass prairie, geological formations, AND bighorn sheep, what a day! They kept a close eye on us as we made our way past them into Badlands. We would see more throughout the day.

Hiking through the open prairie broken by smaller buttes was fun, we found some cool photo opportunities as we wandering along the trail. The day was starting to heat up and I was drinking more water. As I look back at this I keep kicking myself- literally. I just knew that I would be fine with just two 32oz water bottles. I wasn’t. I should have brought double that on this hike. 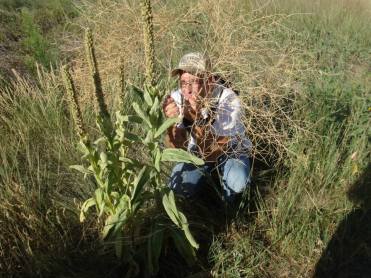 Word of advice- you are essentially in a desert in Badlands National Park, it’s a dry heat, and you’re exposed to sun nearly everywhere you go. Wear appropriate clothing, carry more water than you think you will need, try not to hike at midday, and don’t assume that every popular trailhead will have water.

We stopped for lunch and water around noon we were about the trail tie in to the Medicine Root Trail. We actually debated turning around there and heading back to the parking area. We should have- it might not have turned into a trek thru Mordor if we had. We decided to tough it out and put this 10 mile trail under our belts! I will take a lot of the responsibility for this- again I based my vote on there being water at the Fossil Exhibit Trailhead and everyone agreed with me.

It started getting hotter, we were still a ways till the Fossil Exhibit area and I started rationing water- probably the best decision I had made all morning. We were still in awe of the scenery but were getting a little tired.

We came over the hill to the Fossil Exhibit and were so excited, we were halfway done and water lay ahead.

There was no water. Just a bathroom, the fossil exhibit, and a parking lot.  We debated again. We decided to take a long break and head back. It would have been shorter to do that than hike the highway back to the parking lot and none of us wanted to give up and hitchhike for a ride.

Once that was established we sat down in a shady spot and relaxed. I got bored after a bit and wondering along the fossil trail reading the waysides and witnessing people trying to get photos of a rattlesnake…while screaming “There is a snake, get it away from me!” *snap, snap, snap*

All too soon we decided to get a leg up and head back. I was doing pretty well until we got the mid-point. It was really hot, we were all tired, and water was getting low. We stopped every 20 minutes or so and found shade and tried to recharge. I was limiting water but after each sip I would feel about ten times better. It was hard rationing it.

Like Kris, I made a remark about how we were now walking through Mordor- I got a tired chuckle from him, a moan and an eye roll from Wade.

Walk. Start to feel bad. Think how adventure novels never talk about how much it sucks to walk through extreme climates. Tough it out till everyone else needed to stop. Stop. Find Shade. Sip. Repeat.

I was slowing down. Wade stayed with me and once he realized I was down to one last sip, gave me his water bottle. Apparently, I was dating a camel. He took maybe three drinks and was fine (once we got back to camp with more water, I did make him drink a whole bottle full to be on the safe side).

After what seemed like forever, we were back in sight of the parking lot. That last little chunk was the worst. I was so tired, out of shape, and thirsty. I was slowing everyone else down and I hated it. I finally told them to go on ahead, get the A/C running and I would drag myself there. Wade rolled his eyes at me, sent the rest ahead, made me drink the last of his water, and walked with me to get back to the truck.

We survived walking through Mordor…

Once in the truck, we wanted water, cool air, and a place to sit for a bit. I still wanted to see the VC. We went to Ben Reifel. It’s a really nice visitor center, A/C, water bottle refill station, chairs. We were in heaven. I bored everyone walking around the exhibits and bookstore.

After an hour or so enjoying the A/C and water, we headed back to camp. I was ready to eat and go to sleep. However, the group was hot, bored, and a little tired of the Badlands. We packed up and went home. I can’t say I wasn’t unhappy about that- I was very happy to get back to my own bed with a/c and water. But I was a little sad that we wouldn’t be hitting the other shorter trails the next day like I had planned.

All in all it was a good trip, besides the lack of planning.

Since, I only live a couple hours from the Badlands I try to make it up there a few times a year. I also take extra water now! 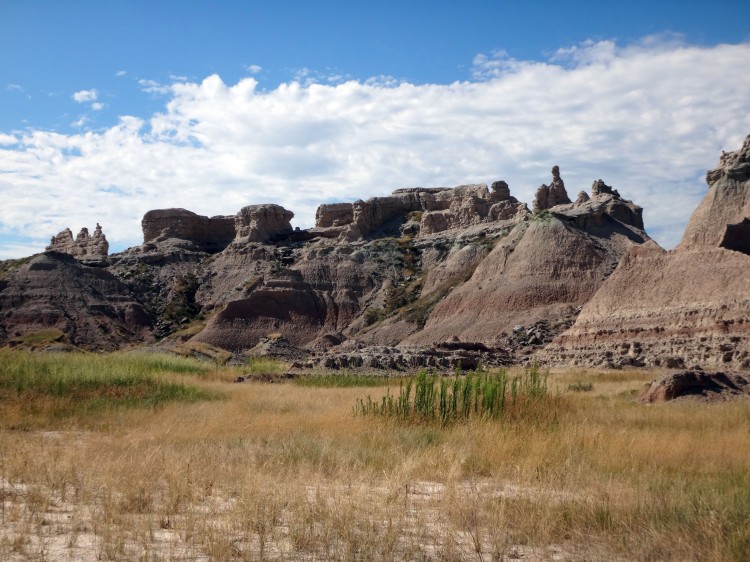 I've always enjoyed the outdoors; I love camping, kayaking, and canoeing. However, I decided to break out the hiking boots for longer than a day or two and dive into the world of backpacking. View more posts