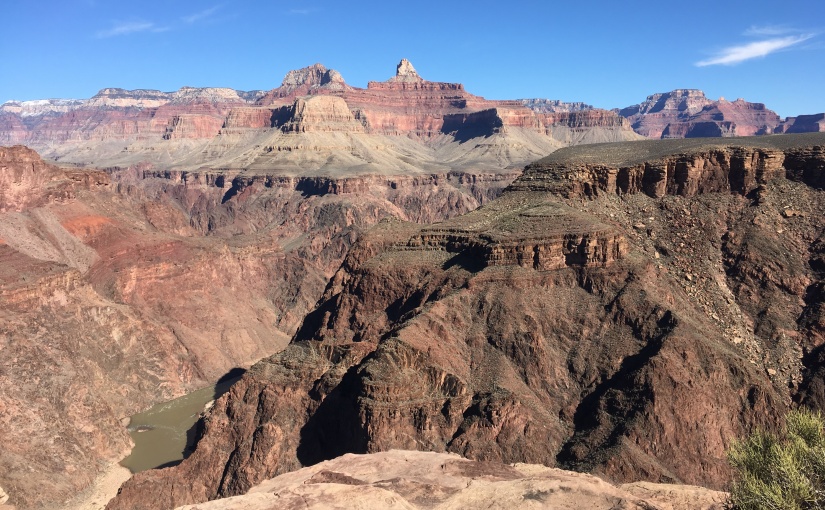 After descending more than 3,000 feet we arrived at Indian Garden, our home for the night. We paused to read a wayside sign about the area and the campground. A little orienting and we found our site.

Indian Garden; is a beautiful place. A perennial creek flows through the campground; I waded into the water even though it was only 60 degrees out but it felt so good on my sore feet at the end of the day. Cottonwoods and willows lined the small creek framing the ranger lodging/office before flowing into the desert and on to the Colorado. In a lot of ways it reminded me of an oasis; it was so green compared to the rest of the canyon.

The little ranger cabin/office also housed a little library area for visitors; they could even charge their electronics, and find additional information. I collected a few site bulletins about Indian Garden when we stopped in to rest our feet. I really wanted to go work in the Grand Canyon after seeing the backcountry cabin. I could hike every day and finally get rid of those extra pounds caused by cupcakes… and I could still eat the cupcakes.

The campground was so quaint; with little covered shelters that housed a picnic table and old ammo boxes for food storage. Apparently, the rock squirrels, deer mice, and ravens like free food that’s tossed to them; who would have guessed? Now, those little critters will just march up to a campsite and steal food lying around; so put it in the ammo can.

Now from reading the wayside (NPS lingo for guide sign on the edge of the trial) I learned a little bit of the history of the Native Americans in the area; primarily the Havasupai. I had limited knowledge of this and many of the smaller bands that frequented the desert. In college I took several history classes about Plains and Woodlands tribes and for my minor in Folklore I took a Native American Verbal Art class; desert tribes, except for the Navajo and Apache, didn’t really come up. I was regretting that now.

Back up on the Rim; while in the NPS bookstore I would find a very interesting book about the Havasupai, their history in the Grand Canyon, history with settlers, and their struggles with the NPS, and other agencies, since the parks creation. It is a worthwhile read, I Am the Grand Canyon: The Story of the Havasupai People by Stephen Hirst, for those of you that are interested.

FYI when I’m not hiking I’m reading; if it’s a great book or story about backcountry hiking or historical background I will sing it’s praises in my blog. Possibly, even base the blog around the book, if it features backpacking. 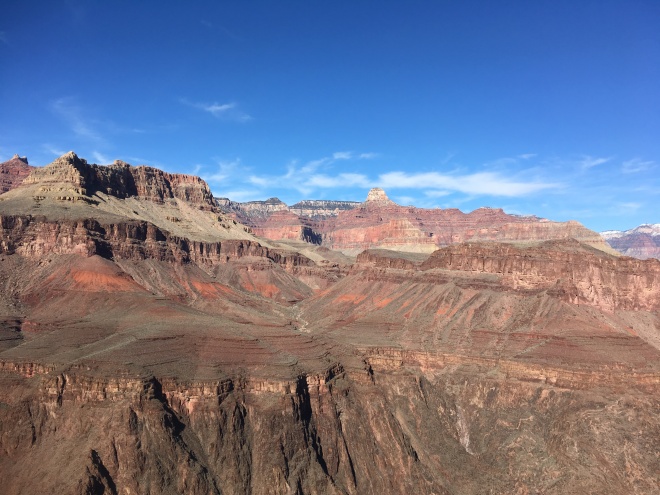 When I sat down and read the book I was a little heartbroken by what had happened to Gswedva (Big Jim) and Burro’s garden land under the rim and how they were forced off of it to make way for progress. Thinking back to my time in Indian Garden, I could image their heartbreak at having to leave a place they had called home for generations. The sad thing was this didn’t happen all that long ago in the grand scheme of things, Burro was forced to leave in 1928.

Many of the other Havasupai would lose their homes on the rim and be regulated to roughly a 500 acre reservation at the bottom of the of an offshoot canyon, along Havasu Creek. Their restriction to the bottom of the canyon occurred in 1882, thirty-seven years before the Grand Canyon became a National Park, and it would take nearly fifty years to move all of the Havasupai from their Rim lands down to the small tract that was only suitable for farming. The Havasupai would augment their harvest with hunting and gathering on the rim in the winter. However, that was no longer allowed and could result in imprisonment if they were found to be supplementing their food storage.

Later in the 1970s the Havasupai would successfully plead their case against strong opposition from NPS, surrounding landowners, and even environmental groups to reclaim lost acreage on the top of the Rim. In 1975, ninety-three years since the small reservation had been established, Congress passed the Grand Canyon National Park Enlargement Act that would return 188,077 acres of both plateau and canyon lands to the Havasupai; enlarging the reservation from its 518 acres.

Sorry for the historical rant; back to the backpacking trip. We got our camp situated, pulled our lunches out, and sat down to plan the rest of our day. After reviewing the map and filling our stomachs; our driver and day hiker was going to return to the top of the rim, the experienced person in the group was going to hike down to the Colorado (I so wanted to do this but I was a little foot sore and my shoulders were killing me), and the newbies were going to Plateau Point.

Leaving the camping oasis we had a one and a half mile hike to Plateau Point, through beautiful open terrain. It was warm, light wind, and sunny. The trail was well maintained and moderately packed with people. Once we got to Plateau Point the visitors had dwindled, only two other people were about and they left about ten minutes after we got there. We had the point to ourselves.

After taking several photos of the Inner Canyon and the Colorado River; I just sat and soaked it in; watching a lizard sun himself (or herself) on a rock, birds’ flittering back and forth across the inner rim. It was faint but you could hear the few rapids below and when the breeze was just right smell the river. I enjoyed my Gatorade, fruit punch is where it’s at, even if it leave a red mustache. We sat there a good chuck of the afternoon, watching the sun paint the canyon in different colors as it lazily drifted through the sky. All too soon we started our march back to Indian Garden.

We were just getting back to the rest house at Indian Garden, the sun was just starting to go down; creating a beautiful backdrop to a spectacular day. I was sitting on a bench waiting for my hiking partner to return and to be rejoined by the other guy whom we saw coming back up the Bright Angel Trail from the river. When I was joined by a rather fit you man that was planning on hiking out that night; he had hiked down to the river himself and was making his return.

We got to talking, turns out this was a nearly a monthly trek for him and he loved the canyon. Since the light was fading we didn’t hold him up too long. By the time we had finished talking our fellowship was once again complete. (Did I mention I’m a LOTR fan?) We made our way back to camp for dinner.

It was mid dinner when the park ranger made his rounds checking the permits and visiting with the hikers. He was so cool and he totally loved his job. He answered several of my questions and recommended nearly half of the books I would buy the next day. Once our meal and conversation had finished we all wondered off to explore the fading light. I made my way down to the creek and stuck my feet in it again.

Looking at the Rim I was able to see the Watchtower light in the distance, before being overwhelmed with stars. Living in rural (and I mean rural) Nebraska we have excellent night sky conditions. In the Grand Canyon I was blown away. One quick trip to the bathroom and I wound up walking with my hiking partners again. We made one more stop into the ranger cabin, they were looking for something to read. Before returning to camp.

Once the sun went down and we were no longer moving very much it started to get cold. It was an early bedtime for us; we retired to our respective tents. I joyously climbed into my mummy bag and powered up my Kindle. I was reading about Australia in a matter of moments. Bill Bryson has a way with words and after reading about Ayers Rock, Bill explaining how it was a sacred place for Aboriginals’, I had a little moment of connection to how the Native Americans viewed the Grand Canyon.

Almost ten o’clock, I was getting sleepy but after drinking nearly a gallon and half of water I needed to make one more trip to the bathroom. It was a chilly walk but just as amazing; I thought the stars had been clear right before we crawled in our tents. I was wrong; everything was so sharp in the sky. I heard an owl hooting on my way back.

I didn’t want to leave. 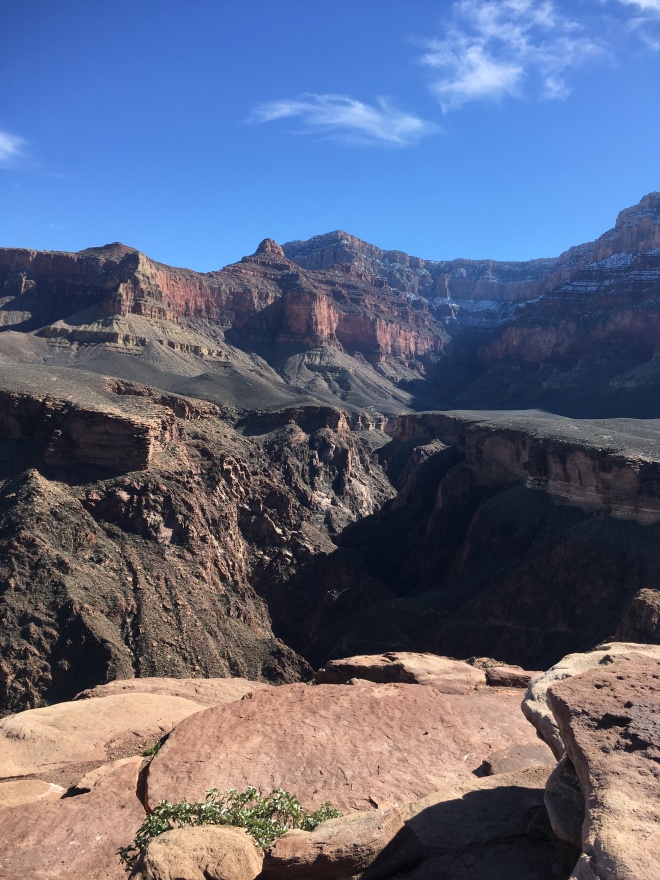 I've always enjoyed the outdoors; I love camping, kayaking, and canoeing. However, I decided to break out the hiking boots for longer than a day or two and dive into the world of backpacking. View all posts by BJ